If ever there was a truly cyntillating sound, it comes from Trilok Gurtu's talking tablas. Super star Gurtu is the classical music world's best kept secret, but a famed and favourite at festivals of jazz, pop and world music all around the globe. Classic in his disciplined approach to percussion, Trilok Gurtu has collaborated on over 80 CD's with the most eclectic group of top musicians imaginable.

Now celebrating 20 years of such collaborative performances, Gurtu has recently released a double CD, 'The Definitive Trilok Gurtu'. Actually, with someone so eclectic, catching him on merely two CD's could really never be definitive!

We caught up with him last week when he performed, again in incomparable collaboration, at Amsterdam's famed classical temple, The Concertgebouw. The occasion was the 60th anniversary of Radio Netherlands Worldwide whose broadcasts in 10 different languages around the globe foster not only freedom of press and expression but support correct information concerning Holland, its culture and politics (as Radio France is to France, Deutsche Welle to Germany and BBC World to the UK).

Who better to explicate this international mission than a musician like Gurtu, who, in said concert, worked with musicians from Curaçao, Venezuela, Argentina, Suriname, Mali, France, and o yes, Holland.

Front stage Concertgebouw was exciting, backstage was fascinating, 'the making of' of these performances where Trilok Gurtu was exemplary in his dedication to great music, rehearsing for the first time with all the other musicians involved: 'good music is one, it is not music from Africa or from America or from Germany, it is one like God is one...musicians make bridges not borders, that is what the world requires'.

His drum set alone demands an extensive and specific set up as it is a combination with a parallel only found in hip fusion cooking: a good chunk of fresh Indian vegetables, a pinch of jazz salt, a good dose of worldly peppers topped by a sauce of personally supervised spices collected on his travels. The correct metal bucket of water was found only at the last minute, making Gurtu's famed, intimate water rhythms thankfully possible.

His interest in all music is boundless. 'What's that?', he asked as my ringtone (Scherzo from Bruckner's Seventh Symphony) interrupted the conversation. 'You know who rights the best melodies? Mozart! You hear them once, you never can forget them!' 'All jazz is really Bach, Bach wrote the best progressions'...'know any good young Dutch composers? Tell me!'.

Food (and wine) are the passions that accompany this musical chef. Trilok Gurtu is always interested in, talking about, and enjoying good food, as eclectic in his taste buds as in his musical taste. He is open and encouraging to all musicians, as long as they are serious about their work. Totally demanding in how he spends his time, a long drive to an isolated rehearsal location was spent in practice, tapping the surfaces within reach in the Jeep that transported him (with a small trailer full of his drum set dutifully in pursuit). Turning up the heat in frosty Holland, he smiled: 'I need a bit more India!'.

What would it really sound like all wondered, this elegant Indian in his beautiful silk outfits, barely viewable amidst a battery of percussion odds and ends, including of course his water bucket?

Sound checks were lengthy and demanding, the tuning and acoustics have to be just right, but all the collaborations were warm and intimate as musicians who had always dreamed of performing with him actually got down to business: the classical timpanist Nando Russo ('I have followed him since I was a child'), the Dutch pop phenomenon Blaf ('we always thought, if we could ever play with someone like Gurtu!')

'Yes, yes, good, good, we will make this work', he encouraged. It sounded, surprisingly enough, melodious. Gurtu sings percussion, teaching timing by getting his students to sing rhythms, and literally singing them himself, as when he takes the pop solo to new heights with his vocal acrobatics.

Trilok Gurtu is at home in any musical setting, with singers, with a classical string quartet, with the brass section of the Royal Concertgebouw Orchestra, even with royalty itself. Backstage again, but now after the concert, Holland's Princess Maxima did not rush home as was expected, but stayed on to meet Gurtu, fascinated too by all the musical t-te-a-t-tes he had inspired. 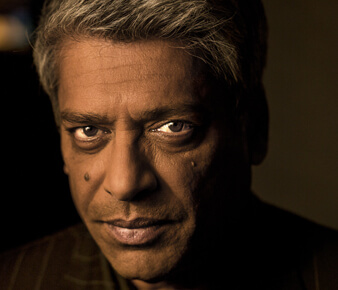